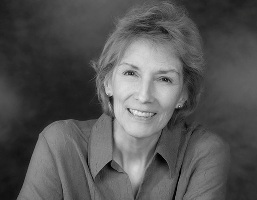 "A few years ago I was researching a project on the environment and I read through many of the important nonfiction books on the subject of climate change and related problems mounting in the natural world. It's heavy stuff and it occurred to me that approaching these issues from another angle, in an imaginative and entertaining manner, could be a good idea. I wanted to write something … different. As I worked on Threshold, it became differenter and differenter. Then all these animals showed up. To tell the truth, it got completely out of my control."

Patricia J Anderson was born in the California Bay Area. Her first published essay appeared in The Oakland Tribune. She was 11. She tried hard not to be a writer but there are some things in life you just can't do anything about. You are what you are.

Patricia’s books include All of Us, a critically acclaimed investigation of cultural attitudes and beliefs, and Affairs In Order, which was named the best reference book of the year by Library Journal. Her work has been published in numerous periodicals such as The Sun, Tricycle, Chronogram, Ars Medica, Glamour Magazine, and Rewire Me.com. Her short stories include Faster Than a Speeding Bullet, Snowfall, and The Last Message.

She attended San Francisco State College and the University of California at Berkeley and began her professional career as an editorial assistant at the University of California Press and then as a production and editorial assistant at KRON-TV News in San Francisco, eventually hosting radio talk and interview programs at KPFA-FM, Berkeley and CKGM-FM, Montreal. As a partner in ZBS Media, a radio production company, she wrote and produced a wide range of both commercial and noncommercial programming including documentaries on Ken Kesey, Keith Jarrett, Joseph Campbell and Eric Idle.

She is co-author of Taking Charge, a marketing and management "how-to" book for nonprofit organizations. Articles for trade publications and journals include: Money and Madness: Fundraising in the Arts and A History of Philanthropy in the West.

Patricia has produced exhibition, kiosk and website copy for such institutions as the American Museum of Natural History and the Capital Museum. She is the editor of Craig Barber’s Vietnam journal, Ghosts in the Landscape. She lives in New York's Hudson Valley.